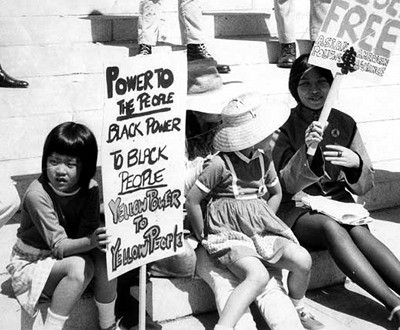 As Andrea Smith has written, there are incentives for all peoples of color to be complicit in white supremacy. As the numbers shift, it is important to pay attention to the racial bribes that we all face. Will more people of color with light-skin privilege, for example, decide to identify with whiteness? Or at the very least, to distance themselves further from Blackness? What must we all do in order to build authentic solidarity?

One quick point on our research: We started out intending to include Native Hawaiians and Pacific Islanders (NHPIs) in our cohort. But time and time again we heard that NHPI peoples routinely face marginalization in what are, in fact, Asian American-dominated spaces. Exploring racial justice work from NHPI perspectives should be done in a way that centers their experiences. In the end, we decided not to interview NHPI informants, to avoid relegating their voices to the sidelines.

I had the great privilege of having powerful conversations with 87 racial justice leaders over the last half of 2011. Together they represent some of the most exciting racial justice efforts in the United States today – in areas like low-wage labor organizing, immigration, civil rights, criminal justice reform, and gender justice. Although the vast majority were Asian American, many were not organizing specifically in Asian American communities, and a surprising number said that they don’t actually identify as Asian American. This reflects one of our main findings: that while racial identity is political, many Asian American racial justice organizers view the Asian American construct as an awkward coalition of ethnic subgroups, not as a cohesive racial group with shared interests. Part of this is due to the widely divergent ways in which Asian American subgroups experience race, based on factors like class, ethnicity, religion, and more.

Many antiracist Asian Americans told me that they hesitate to identify as Asian American because of political disagreements with the most dominant expressions of Asian American-ness. These include what they described as a tendency to reinforce anti-Black racism and the model minority myth. Participants also lamented the lack of an explicitly antiracist and anti-imperialist analysis, the kind that characterized the radical Asian American movement of the ’60s and ’70s. As one person put it, “We lost something.”

In the next steps for this project, we want to explore more deeply what that “something” is. What do antiracist Asian Americans need to do? How can we best serve the racial justice movement? We’ll wrestle with these questions in the coming months, through in-person gatherings as well as through blog posts here.

Not surprisingly, many people said that two main challenges facing the overall racial justice movement are the dominance of “post-racialism” and the limits of liberal multiculturalism. So, in addition to the interviews, we read a bunch of books and articles. We wanted to know what an alternative, more radical take on racial history would entail, and to offer that as a framework for our findings. You’ll find this in the section of the report titled, “The Road to an Era of Racial Confusion.” We hope that others will contribute additional information and insights to help flesh out this framework.

One thing we rarely talk about as Asian Americans is how we have benefited from Black-led liberation movements. Like so many, we’ve gained rights, protections, and access to public programs that were won through struggles against slavery and Jim Crow, which many of us today take for granted. At the same time, some of us benefit from the privileges of “honorary whiteness” – the idea that Asian Americans are the “good” minority, lesser than whites, but better than Blacks. We also rarely talk about how we participate in the ongoing policy of genocide toward indigenous peoples. The legacy of Indian wars, Indian removal, and tribal terminations lives on today. Everyone who lives in the United States plays a role in the culture of settlerism, and Asian Americans are no exception. Of course, peoples of color also participate in and reinforce the ideas of Orientalism, which have justified not only anti-Asian policies historically, but also America’s path toward today’s state of permanent war.

None of us should get trapped in guilt. That’s a passive-aggressive response that serves no good political purpose. Instead, we need to talk openly about our complicity in various forms of white supremacy, as well as about our interests in dismantling it. We hope this report will help to kick off some of those conversations. And we’re eager to hear what you think.